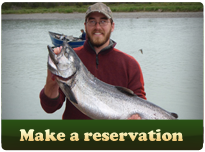 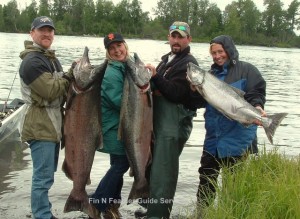 Our Charters on the Kenai River are full day (10-12 hours) fishing trips from a 20ft powerboat.  Our primary method of fishing is backtrolling plugs and eggs.  Our boats can hold 4 fishermen and all tackle and bait are provided.  The limit is 1 King Salmon per day/2 per year with a slot limit in affect during the months on May and June.  Any King Salmon that is caught falling within the slot limit may not be taken from the water and must be released.  Sundays and Mondays are closed to guided fishing trips.

*All anglers must have a King Salmon Stamp

The Kasilof River is home to one of the most productive King Salmon runs in Alaska.  It is a drift boat only fishery making it a very peaceful fishing trip.  We use 20 ft. Willie Drift Boats that can hold 4 fishermen.  All bait and tackle are provided.  The Early Run (May-June)  is a hatchery based fishery and the King Salmon average 15-20 lbs.  The Early Run can produce some fast paced fishing due to the strength of this run.  The Late Run (July) is purely a native fishery and King Salmon are regularly caught weighing over 50lbs. 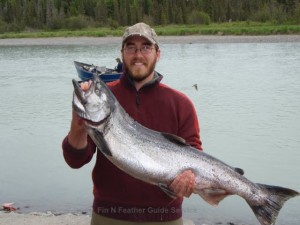 Our Charters on the Kasilof River are full day (8-10 hours) fishing trips.  Our Primary methods of fishing are backtrolling and backbouncing plugs and eggs.  The Early Run has regulations in place that prohibit retention of King Salmon that have an adipose fin on Mon,Wed,Fri,Sun.  All other days, one King Salmon with an adipose fin may be kept.  The daily limit on this River during the Early Run is 1 per day, which has to have a clipped adipose fin.  The Late Run limit is 1 per day with no clip fin regulation.

*All anglers must have a King Salmon Stamp

If you haven’t experienced fishing for Silver Salmon then you are missing out.  Silver Salmon are extremely aggressive and acrobatic fish.  They average 8-10 lbs but are regularly caught weighing 12-15 lbs.  Pound for pound these are the hardest fighting salmon around. 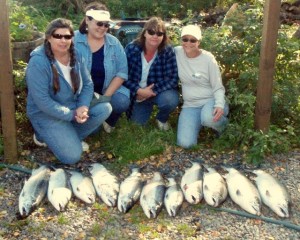 Our Charters are full day (8-10 hours) fishing trips.  Our fishing methods are spinners, backbouncing, and trolling. 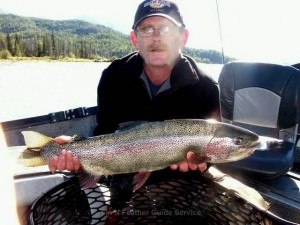 The Kenai River hosts some of the best trophy Rainbow Trout fishing available.  Get ready for some fast paced action when fishing for Rainbow Trout and Dolly Varden.  Every year we catch trout that weigh 15 lbs or more.    This is a catch and release trip only.  We do not harvest Rainbow Trout or Dolly Varden.  These fish are truly magnificent.  The later in the season the better.  We offer Trout trips from July through October.  Our method of fishing is drift fishing beads, flesh patterns, and muddlers.

This is the ultimate anglers combo on the Kenai River.  This is a full day charter (10-12 hours).  In the morning we head out for Silver Salmon and spend the rest of the day targeting Trophy Rainbow Trout.  Be sure to bring a camera, you will need it.