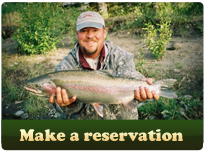 Early Run(May-June)- The early run of King Salmon gets going the middle of May and goes through the end of June.  The peak of the run is the middle of June,  but the fishing in May can be very productive with little traffic from other anglers.  The best River to fish during this time is usually the Kasilof River.

Late Run (July) – The Late Run of King Salmon starts in the beginning of July and runs through the 2nd week of August.  King Salmon Season on the Kenai Peninsula closes on the last day of July.  This run peaks the last two weeks of the month of July producing some fantastic fishing on both Rivers.